Feb 17, 2003 – At the annual meeting of the American Association for the Advancement of Science in Denver, Harvard researcher Richard J. McNally presented data which established that the physiological response from memories of “alien encounter” experiences may be as pronounced as the response from any reality known to be true. This has significant implications, yet only one implication is being promoted by the researcher. McNally has chosen to view these results as evidence of the “power of emotional belief.” However, that conclusion can only be reached if one presumes that alien encounters have not transpired, that they are unreal, and that they are therefore an example of belief – which is, naturally, beyond his study’s ability to determine (a simplistic comparison of contact experiences with sleep paralysis is being promoted by the researcher). The matter of the reality of alien encounters remains unresolved, even as we now have evidence that the impact they leave upon people is as significant as any life experience.

Below we present a copy of a February 17, 2003 BBC article on a research study by Richard McNally of the Harvard Medical School, followed by exclusive commentary and critique from one of the experiencers who participated in the study, and excerpts from additional news articles on this study gathered from around the globe. Of particular merit is an article from the student newspaper The Harvard Crimson.

The study itself has not yet been published. 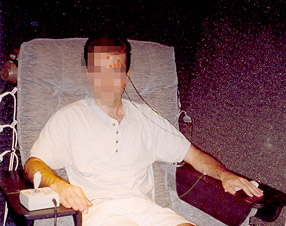 As one of the participants in McNally’s study, I’ve been aware of his personal position on the subject of alien encounters for some time now. As he is a decent man I do not hold it against him that his personal opinion is that alien encounters do not exist; such is entirely his right and it means little to me.

However, as one reads his study (or news articles about it), one needs to be aware that McNally’s personal opinion is not the direct result of his results, which are remarkable. McNally’s study proved that the physiological responses of experiencers are as authentic as the physiological responses of people whose experiences are not considered “unreal.” That has significant implications.

McNally has chosen the safest possible implication — he chooses to view these results as evidence of the “power of emotional belief.” However anyone can see that this is a conclusion which can only be reached if one presumes that alien encounters have not transpired, that they are unreal, and that they are therefore a matter of belief. The study did not prove that alien encounters were fantasy, on the contrary, it proved that the physiological response was as authentic as the response from any reality known to be true. The matter of the reality of alien encounters remains unresolved, even as we now have evidence that the impact they leave upon people is as significant as that from reality.

Although I respect McNally for the research he has done, some of his opinions professed in the article above are based on superficial comparisons which I cannot hold in the same respect — i.e., his suggestion (made here and elsewhere in the press) that because some aspects of alien encounters sound somewhat similar to sleep paralysis and accompanying hypnagogic and hypnopompic hallucination, that that may be an explanation.

The following paragraphs have been revised as of July 2003 to reflect facts that came to light upon review of the actual report, which at last became available in draft form.

Indeed, comments in the press suggested that McNally had shown that experiencers have a higher incidence of sleep paralysis than the average population. A review of McNally’s paper (a draft of the report was recently obtained) has revealed that this suggestion is not supported by the study. The sole reason why this suggestion was made is simply because the report defines alien encounters as sleep paralysis. Therefore, a person who reported life long, frequent contact with apparent aliens was reinterpreted by McNally as a person who reported life long episodes of sleep paralysis, and this evidently put them above average.

The opinion that these two experiences were one was based on the superficial similarities between the initial moments of an alien encounter and the experience of sleep paralysis and the tendency for alien encounters to take place at night.

The opinions of experiencers themselves on the distinctions would be ones to consider here, given that many experiencers are familiar with such states of consciousness, since they have been prompted by their experiences to learn about alternative explanations for what they perceived (including studying what is known about human psychology), and still remain unconvinced that these account for their alien encounter experiences.

Experiencers such as myself who have experienced sleep paralysis once or twice may have relevant information. I can easily appreciate how someone who is not personally familiar with both experiences may be tempted to make a connection between the superficial similarity between sleep paralysis and the initial moments of a typical alien encounter. By most estimates, greater than a quarter of the population (some say 30%) have experienced sleep paralysis, which is to say they have become semi-conscious during the natural condition which keeps our bodies from moving during sleep, a time when our perceptions tend to be skewed. That the experience is only superficially similar to some moments of contact seems to be given short thrift by McNally, and indeed as is common when making such comparisons he makes no mention of experiences which are perceived by two or more people simultaneously — which while not establishing for certain that alien encounters take place in our “reality,” certainly blur the distinction between objective (external) reality and internal (subjective) reality far beyond what scientists can account for.

When I originally read McNally’s comments in the press which seemed to suggest that he’d found a link between alien encounters and sleep paralysis, I considered the following idea: “If experiencers do report more episodes of sleep paralysis than the average population, then this discovery could prompt further research into the question of whether altered states of consciousness, such as the states of consciousness between wakefulness and sleep, may be conducive to extraordinary perception (a possibility suggested by Sherwood, S. in the Journal of Parapsychology, June 2002).” Such an exploration may still have merit, however as noted above, McNally’s report did not document an elevation in episodes of sleep paralysis, it merely noted an elevation in alien encounters and then redefined the encounters as sleep paralysis.

A second statement which deserves a closer look is McNally’s suggestion that people who report alien encounters have unusual beliefs about reality, beliefs which he says in the BBC article existed prior to their encounters. One needs to bear in mind that according to most studies, adult experiencers have tended to have had encounters since childhood which they may have disregarded at the time for the most part (childhood experiences tending to have a different quality than those in adult life). If encounters do begin in childhood, then the development of novel ideas about reality may well be the result of their early experiences, even if they did not become fully aware of their experiences until later in their adult lives. In short, “cause and effect” remains in question even for that aspect of his study.

I hope that a critical reader will take into consideration the details of this report, and understand the remarkable results of his physiology study are not diminished by the personal opinions of the researcher.

The BBC article was also picked up by HealthScoutNews (syndicated on various websites such as Yahoo), and run in an abridged form:

Coverage of McNally’s study was also picked up by AP (Associated Press) on February 17, paired with information about what AP described as a “new” study about “implanting false memories” by Elizabeth Loftus. In fact Loftus’ study was already reported on last year (the “Bugs Bunny is a Disneyland Character?” study), but it is being reported as if it were new. McNally’s study is mentioned at the end:

An Australian news agency called the Herald Sun ran a similar version of the story on the 19th:

This article from the UK at least has an amusing headline.

The Financial Times (!) also reported on the study. In this article McNally suggests that his results provide a cautionary note: that inaccurately recalled memories (“recovered memories” are cited, possibly a nod to attendee Elizabeth Loftus, see AP story above) can produce intense emotional reaction. Though he is well intentioned, we again note that McNally is taking the position that alien encounters are examples of inaccurately recalled events in order to make his case. If they are in fact events which are recalled with some accuracy, then logically the study’s relevance to this point is null.