A biography of Dr. John Mack has been written by Ralph Blumenthal, the award-winning reporter who broke the news of a secret Pentagon UFO unit.

The Believer will be published in March 2021.

The Believer is the weird and chilling true story of Dr. John Mack. This eminent Harvard psychiatrist and Pulitzer Prize–winning biographer risked his career to investigate the phenomenon of human encounters with aliens and to give credibility to the stupefying tales shared by people who were utterly convinced they had happened.

Nothing in Mack’s four decades of psychiatry had prepared him for the otherworldly accounts of a cross-section of humanity including young children who reported being taken against their wills by alien beings. Over the course of his career his interest in alien abduction grew from curiosity to wonder, ultimately developing into a limitless, unwavering passion.

Based on exclusive access to Mack’s archives, journals, and psychiatric notes and interviews with his family and closest associates, The Believer reveals the life and work of a man who explored the deepest of scientific conundrums and further leads us to the hidden dimensions and alternate realities that captivated Mack until the end of his life.

“This extraordinary biography reads like a fast-paced thriller. It deftly weaves the detailed richness of John Mack’s genius and complex life through the historical backdrop of the alien-abduction phenomena. Ralph Blumenthal has so beautifully captured the essence of Mack’s soul and his relentless curiosity that by the end of the book I mourned that Mack is no longer with us.”
— Trish MacGregor, coauthor of Aliens in the Backyard: UFO Encounters, Abductions, and Synchronicity

“As a person sane enough to hold a driver’s license, I say, what are we to make of Mack’s findings? Read this gripping, factual account of a mental-health pioneer and truth-seeker by a soundly accredited successful author, veteran New York Times foreign correspondent, and reporter. Decide for yourselves and then tell me!”
— Dan Aykroyd

“Anyone who is intrigued by the involvement of John Mack, a psychiatrist on the faculty of Harvard, or by the interest of psychiatrists in the anomalous in general and UFOs in particular, should not miss reading this book! It is filled with details on the topic, both pro and con, that are not publicly available in any other place that I know.”
— David J. Hufford, author of The Terror that Comes in the Night: An Experience-Centered Study of Supernatural Assault Traditions

“John Mack was one of the few prominent American intellectuals who saw and said what was, and still is, really at stake in the UFO phenomenon—reality itself. And Ralph Blumenthal is the perfect biographer to take up Mack and bring him to life, in all his humanity and complexity, on the page. A major achievement.”
— Jeffrey J. Kripal, author of The Flip: Epiphanies of Mind and the Future of Knowledge

Remembering the late Dr. John Mack, and his courageous defense of “experiencers” of alien contact, on this anniversary of his birth (Oct 4, 1929). 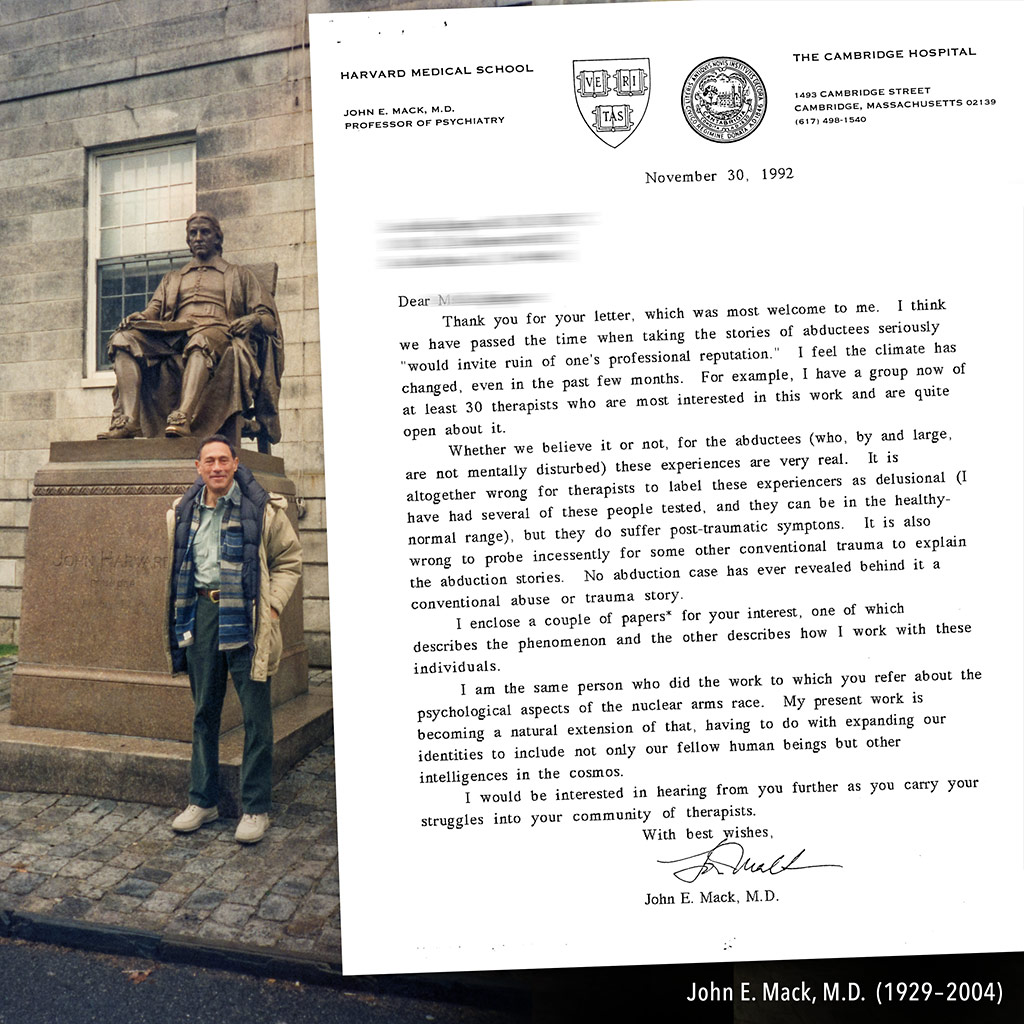 September 1, 2020 – A Japanese edition of Dr John Mack’s Passport to the Cosmos may be in the works. We say “may” because the publisher’s schedule seems to have been affected by the COVID-19 crisis. We are hopeful that an announcement will come in 2021. This would be the first time that Mack’s “final word” on the alien encounter phenomenon has been translated into Japanese.

If you are a publisher interested in releasing Passport to the Cosmos in your country, please contact us. This book has been released in several languages (see the links in the footer of the website) but we would like to see it released in many more.

Reediciones Anómalas of Barcelona is publishing Abducidos, a Spanish translation of Dr. John Mack’s Abduction, in June 2019. This was Mack’s first of two books about alien encounters.

END_OF_DOCUMENT_TOKEN_TO_BE_REPLACED

1Center of Taiwan is publishing a Chinese translation of Dr. John Mack’s Passport to the Cosmos in January 2019. This was Mack’s second book about alien encounters, and was his final word on the subject.

The question on the front cover asks, “The communication between aliens and the human race – is it purely terror, or the spreading of wisdom?”

END_OF_DOCUMENT_TOKEN_TO_BE_REPLACED

AUGUST 2017 – The filmmaker who is developing a documentary about the extraordinary events at the Ariel School has released a statement that we’d like to share:

END_OF_DOCUMENT_TOKEN_TO_BE_REPLACED

September 3, 2015 — We are sadly overdue in honoring John Mack’s friend and colleague, renowned educator Richmond Mayo-Smith, who died at the age of 92 in Boston on January 10th, 2015. Ever the thoughtful teacher, Richmond wrote some thoughts that were shared at his own memorial service.

“Life is more beautiful than I ever imagined.
Life on earth is a school.
Don’t be confused by what you have been taught,
rather close your eyes and listen deeply to your
inner resonance. There you come to know what is
true. Everyone must be courageous to follow a
deeper calling than societies’ prescription.
I am no longer worried, for I now see a deeper
truth.”

We can do little more at this moment than say that Richmond was among the wisest people who John knew.

Those of us who met Richmond through John’s work would all say that it was a privilege and honor.

For our Italian readers, an announcement regarding the first-ever Italian translation of Passport to the Cosmos by John E. Mack, M.D..

Venexia Editrice says: “It is with great pleasure that Venexia presents a new series of books devoted to ufology. Many of our readers have asked us to explain this choice, as most know our publishing house for its selection of texts about esotericism and spirituality rather than for other topics. Here’s a quick response.

The mysteries of the universe are endless. We don’t know what may be occurring; if there may exist extraterrestrial beings who inhabit our galaxy, creatures who may dwell in a multiverse, entities who may be close to us yet whom our senses prevent us from perceiving, or who knows what else. All we can be sure of at this time is that something is going on that is at once psychic, mythical, imaginary and tangible. Too many people have had experiences with unfamiliar beings for the phenomenon of UFOs to be ignored and – most importantly from our perspective – all are transformed with the certitude that the way we interpret the world is limited, if not downright harmful to life on Earth.

Venexia is happy to offer its readers important books that deal with these topics, such as Passport to the Cosmos by John E. Mack, a Harvard psychiatry professor, Pulitzer Prize-winner and highest authority on the phenomenon of abductions by alien beings. In all these books, the personal experiences and professional research lead towards a renewed sense of the sacred and of reverence for nature that can make us reflect upon, and be delighted by, possibilities of extraordinary beauty.”