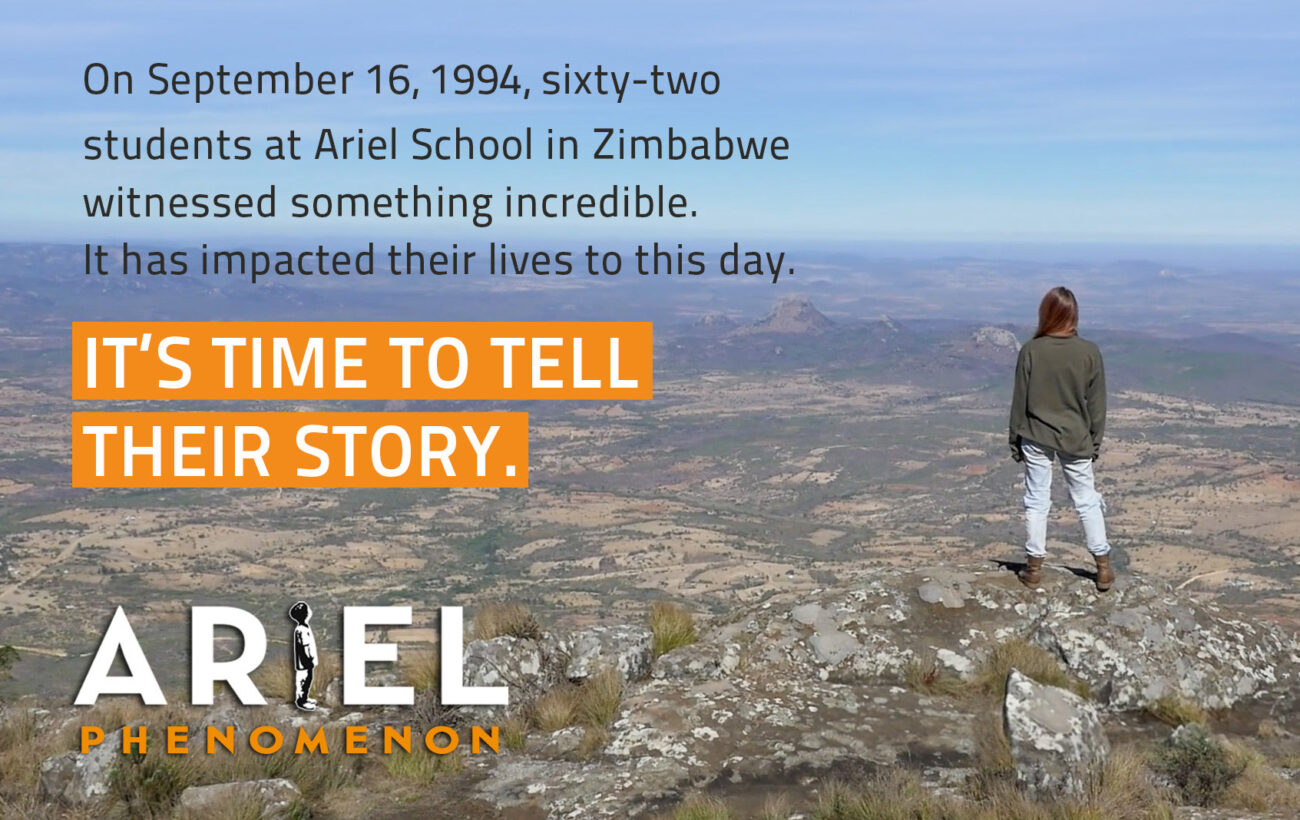 Available now – click here!
Ariel Phenomenon explores the infamous Ariel School UFO sighting witnessed by over sixty schoolchildren in Zimbabwe in 1994. The story covers a former student’s journey back to the African school – the place that, at the age of nine, shattered her reality. Interviews with witnesses, now scattered across the globe, ask the question many have struggled with for over two decades: what happens when you experience something so extraordinary that nobody believes you? Produced by Randall Nickerson.
101 min. / English / Color / USA / 2022

“The most effective story told on the subject that I have ever seen.” – Douglas Trumbull

“Ariel Phenomenon is powerful, life-affirming, and brought me to tears.” – Josh Boone

“I enjoyed the film greatly. It puts the issue in a touching, emotional place.” – Dan Aykroyd

“Worth every second of the wait.” – Ryan Sprague

“An understated and deeply moving perspective… a potent study of how corrosive to one’s spirit the denial of truth can be.”
– Simon Foster, Sydney Science Fiction Film Festival [click]

“Nickerson’s tenacity has managed to produce a solemn, restrained, and challenging addition to the UFO corpus, one which should rightfully command global audiences. …a film that appears destined to enjoy stellar ratings on the Tomatometer.”
– Billy Cox, Life In Jonestown [click]

“It left me inspired and awestruck, and that’s how I hope it leaves you.”
– Linda Cook, OurQuadCities [click]

Listen to the beautiful score for Ariel Phenomenon by composer Henrik Åström. Samples of Emily / Legacy / Religion may be heard on his website. Åström recently completed the original score for the film together with composer Nate Walcott. www.henrikastrom.com
Åström tells JEMI that they are exploring the possibility of a digital release of the score. We will keep you posted!

Emily Trim & Randall Nickerson were interviewed by Martin Willis in late 2019. Emily is a central figure in the documentary. She rarely grants interviews. Listen here: PodcastUFO

Emily Trim was also interviewed in late 2020 by Stuart Davis. The 2-part interview is available at AliensAndArtists.com.

“Just finished it. GD what a heavy film. I don’t think I’ve ever cried after one was over. I’m going to have to process that one for a while. Thank you for sharing this story.”
— Nathan Shortt @NathanDodeca

“I’m watching it now. It’s truly great and far more touching than I was prepared for.”
— Ryan Terry @RyanTerry

“I shed a few tears, and I imagine others will too.”
— Emma Woods @emmawoodsbooks

“Finished and it was excellent. A sentimental touch that doesn’t exist in other UFO documentaries. Glad the people behind the film didn’t bend to demands from publishers to include ‘big names’ because the film stands on its own with the cast it has – the students.”
— Art Geigel @omniasoft

“It came off as a sincere and faithful telling that respected the experiences of all those involved. It could have been any of us. They represented humanity for all of us that day. I loved it. My partner who is not totally interested in the topic was captivated as well. Following Emily Trim’s emotional journey complete with difficulties and traumas made what so many experiencers have faced so real and relatable.”
— Nicholas G @SpinDubTracks

“It was amazing. I have been following this subject for some time but have been highly skeptical. There were several instances while watching that I felt a visceral feeling of fear and realization that these children really did see something.”
— Bryan Jones @bryannjones

“At some point in time while watching this film. It will hit you. Humanity has not only been kept away from knowing about the phenomenon’s existence. Humanity has also failed to help those who actually saw the abyss staring back. …Humanity failed these kids.”
— Fernando Jimenez @Arnfden0

“The film is humble, kept it to the witnesses and those directly involved, no conspiracy at all and that separates this film from absolutely everything else ever made on the topic. The witnesses tell their story with no attempt by the film maker to distort. Brilliant in that way.”
— Crypto Dino Beaver @CryptoDinoBeaver

“There’s a lot of things they could have introduced: history, cover ups, MIB, Roswell, etc. I think it’s stronger without that stuff. The film is strong for the things it hasn’t put in.”
— James Jack @jamesjack

“A moving and heartfelt film that captured the mystery of the phenomenon, as well as the lasting effect on experiencers. Best UFO doc ever in terms of emotional impact. All those kids were clearly stunned, and telling the absolute truth as best they could. Bravo!”
— James Faulk @jfrickingfaulk

“Just watched Ariel Phenomenon. Very touching. Essential for humanity to understand that we are part of something much much bigger than ourselves. I could watch it a dozen times.”
— just an echo in the chamber @BeLikeWahter

“Randall’s most beautifully made film is an absolute must see. Huge respect to all involved in bringing this to the world, and to the witnesses – you are not alone in your thoughts & feelings. Thank you so, so much, always love.”
— Max E McCabe @MaxEMcCabe

“Really good, interesting and shocking documentary that will not leave you indifferent. Time to open your mind…”
— Raul Gallego Abellan @raulgaab

“So powerful. Watching the children recall the event makes any debunking efforts against it seem incredibly ridiculous. Almost like skeptics are the ones w/ the mental illness, not the other way around. 10/10. Must watch.”
— David John Lanier @ Munook

“Ariel Phenomenon is a stunning achievement. I hope everyone gets to watch this tearjerker. Thanks to Randall Nickerson for making it, and to all the brave witnesses for telling their stories in such an emotionally honest way. Finally a UFO movie for, and by, UFO experiencers!”
— The Hermetic Penetrator @THP_22_22

“A ☆☆☆☆☆ masterpiece. A profound, empathetic study of life after an extraordinary event. Randall Nickerson has made an outstanding film.”
— Anthony Peake @ParanormalBlip

“I was highly impressed. The cinematography, camera work, sound track, production value… all top notch. If you’re looking for nothing more than ‘show me dem aliens’ you might not like it as much. But it was beautifully done.”
— Jazz Shaw @JazzShaw

“The most captivating film I’ve ever seen. Randall does a brilliant job weaving the story lines of Dr. Mack, Tim Leach and Emily Trim while being able to tell this incredible story without typical narration or reenactments. This is a beautiful film that the whole world should see.”
— Dan Schmidt @TheDanSchmidt

“An amazing and beautiful film. I hope it hits a major platform soon, it should be viewed by the whole world and especially the Congress members investigating UAP matters. No doubt what they saw was absolutely real.”
— UAP Costa Rica @UAP_CR

“Would also like to say Rest in Peace to Tim Leach, RIP John Mack, and thank you to all of the students and staff who told their stories. Zimbabwe is a beautiful place and I’m glad I got to learn a bit more about this snippet of the land and people there. Thanks @ArielPhenomenon!”
— Mike Paris @MikeParisDMV

“Finished Ariel Phenomenon. The backdrop of Zimbabwe is stunning and the cinematography is gorgeous. But more than anything, the credibility captured was unparalleled. This is the Times Square landing everyone wants.”
— AwakeWhileSleeping @KrysDevine

And a couple negative reviews…

“What a waste. Who is interested in the lives of those who were there? Maybe talk about UFOs and extraterrestrials. Boring.”
— Zachery Larson @zachery_larson

Also in the News:

May 2, 2022 — Rep Tim Burchett (R) says the Department of Defense is not revealing what they know about UAPs, and not complying with the requirements signed into law in the 2022 Defense Act. “There’s an arrogance in government at that level that we cannot handle what’s going on out there”, he told NewsNation. “It’s a bogus cover-up. It doesn’t fit and it’s about power and control.” The 2022 National Defense Authorization Act mandated regular reporting, engagement with foreign allies, and a coordinated effort to research and possibly replicate UFO technologies. Burchett is remarkably candid in his criticisms. He concludes the interview by saying “I’d love to tell you what I already know right now, but I can’t. But hopefully at some point I can.” Click through to watch the 7m video interview with Rep. Burchett.

May 10, 2022 — “A House subcommittee is scheduled to hold next week the first open congressional hearing on unidentified aerial vehicles in more than half a century, with testimony from two top defense intelligence officials,” reports The New York Times in an article by Ralph Blumenthal and Leslie Kean. Rep Adam Schiff (D), the chair of the House Intelligence Committee, said the hearing is to illuminate “one of the great mysteries of our time and to break the cycle of excessive secrecy and speculation with truth and transparency.” Seven months earlier in a Reddit interview, Schiff was asked “What would you say has been the biggest surprise about your current role on the House Intelligence Committee?”. His answer: “Aliens?“. Conservative expectations are that the briefing may only be a status report on how the setup of new systems for reporting and analysis is progressing, and there will be no discussion of theories. Rep Burchett tweeted, “I predict these officials won’t be nearly as transparent as they should be.” The hearing takes place Tuesday May 17, 2022; watch the livestream.

May 17, 2022 — As expected, the public hearing on UAPs did not advance any theories and restated last year’s position that the Department of Defense does not know what UAPs are. (See June 21, 2021 news, “DoD Has No idea What UAPs Are”). One significant missed opportunity was noted by NPR: “Scott W. Bray, the deputy director of Naval intelligence, told lawmakers that … None of the documented objects had attempted to communicate with U.S. aviators, and no attempt had been made to communicate with them, he said, as they all appeared to be unmanned.” (Source: “The military’s UFO database now has info from about 400 reported incidents“, NPR, May 17, 2022). For more highlights, see coverage at TheDebrief and ABC News, or read the transcript.

May 18, 2022 — Journalist Ross Coulthart tweeted, “Intriguing: The Congressman who asked some of the shrewdest Qs in the UAP hearing, Rep. Mike Gallagher, suggests the time travel / interdimensional future human hypothesis as an explanation for #UAPs”. The remarks came during an interview on The Pat McAfee Show. This link to YouTube is set to begin playing just before that exchange (at 1:31:43): youtu.be/vbHokbn6zqA