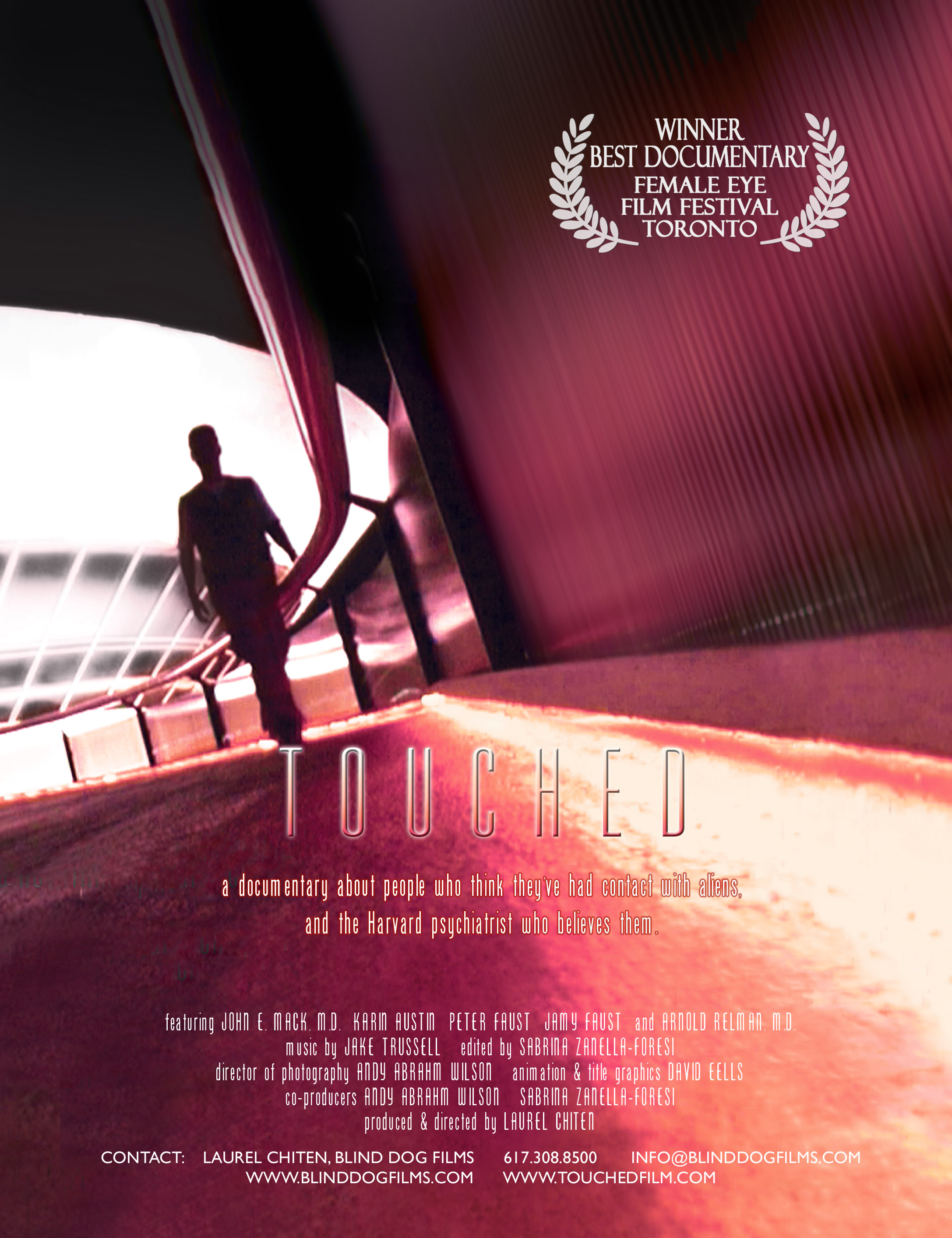 The Female Eye Film Festival (FeFF) is a Toronto based international independent women’s film festival. The screening was held Saturday Nov 22 at 1:30 PM on the documentary screen of the festival. Filmmaker Laurel Chiten also took part in a panel discussion on Sunday. For more information on the film festival, please visit femaleeyefilmfestival.com.

Chiten is currently in New Mexico, where her film screened at the Santa Fe Film Festival. “Touched” played earlier this year at the Museum of Fine Arts. See previous article about Touched’s premiere.

The educational premiere of Touched was at Harvard University, at a Mind / Brain / Behavior Junior Symposium: “Schizophrenia, Dreams, and Alien Encounters” convened in September 2003 by Edward Kravitz, Ph.D. of the Neurobiology Department of Harvard Medical School.

Filmmaker Laurel Chiten was interviewed by Whitley Strieber on Dreamland.

Touched also won Best Documentary of 2003 in the “Abductee or Contactee” category (!) at a long-running UFO convention, The International UFO Congress in Laughlin, Nevada, in 2004.

CALIFORNIA
San Francisco
Friday, Feb 20th, tentatively planned for 6:00 pm.
Join Dr. John Mack and filmmaker Laurel Chiten for a special screening and reception in the Penthouse of 3220 Sacramento Street (near Lyon), San Francisco. $40 admission per person, proceeds to support the making of the film; please contact us for more information.

Los Angeles
Join Dr. John Mack, filmmaker Laurel Chiten, and host Shirley MacLaine for our first Los Angeles screening and discussion.
DATE TO BE RESCHEDULED: CHECK BACK SOON! The date we had planned was so close to the Academy Awards that we felt it would be in the best interests of everyone if we changed it to another weekend, probably in April or May. We are checking in to possibilities now and expect to announce a new date soon!

NEW YORK [This screening was added after the death of Dr. Mack in Sept 2004]
A screening of the 65 minute film, and a tribute to Dr Mack’s life hosted by Alan Steinfeld of the New Realities cable tv series, with speakers Trish Corbett and Michael Mannion of the Mindshift Institute, Harold Eglen, director of S.P.A.C.E., and Alex Grey, visionary artist. Sponsored by: New Realties; Healing Gifts; The Concordia Foundation; Spirit New York; and FIONS (Friends of the Institute of Noetic Sciences) as part of the FIONS film series.
WHERE: Healthy Yoga, 4th floor, 540 West 27th (between 10th & 11th Ave)
WHEN: Saturday December 11th, 7pm

Feedback from the Screenings of TOUCHED:

“I screened Touched at a symposium for undergraduate juniors. Students’ initial skepticism about the subject was replaced with curiosity, tolerance, and a desire to understand. They could not stop asking questions!”
—Edward A. Kravitz, Ph.D.
Professor, Harvard Medical School

“Touched opens up questions about the complexity of human psychological experience, human relationships, and scientific investigation. It does all this with sensitivity, humor, and impressive cinematic flair. Highly recommended for a lively classroom discussion.”
—Anne Harrington, Ph.D.
History of Science,
Harvard University

“An extraordinary evening. I highly recommend bringing this film to communities around the world if you want to spread the message of the possibility of intelligent life beyond the earth and our unfolding role in the evolving universe.”
—Gary E. Schwartz, Ph.D.
Professor of Psychology
University of Arizona

“Touched shone as a piece of filmmaking… I’d recommend the film highly, if one wants to hear human stories about seemingly normal, yet torn people, and the people in their lives. I’d also recommend it as a superb piece of documentary filmmaking… Ms Chiten is to be commended for her artistry.”
—Nick DiCiaccio,
Freedom of Mind Resource Ctr

“Touched, a documentary by Laurel Chiten, offers a uniquely contemplative perspective on the alien abduction phenomenon. It avoids cheesy flying saucer footage and tabloid hyperbole to focus on real people looking for the truth behind their unique experiences. Chiten presents the ‘experiencers’ and their stories with sensitivity and without judgment, and does not attempt to prove or disprove their theories. She was introduced to their world by John Mack, M.D., a Pulitzer Prize-winning author and Harvard Medical School professor whose research into alien abductions has brought him professional ridicule. Initially uninterested, Chiten became intrigued once she met the human beings behind the wild stories. Mack is an eccentric presence throughout the film, which allows him a dignity he doesn’t often receive in the press. Along with Harvard colleague Alan Dershowitz, he provides some amusingly outspoken commentary on the university’s academic politics. Brazilian experiencers and a surprisingly open-minded Vatican demonologist also provide intriguing commentary.”
—Amy Roeder, Boston’s Weekly Dig (April 9, 2003)