April 12, 2005 – As a prolific writer, Dr. John Mack left behind many papers when he passed away – some widely read, others barely known outside of professional circles. One of the initiatives of the John E. Mack Institute is the archiving of his works. 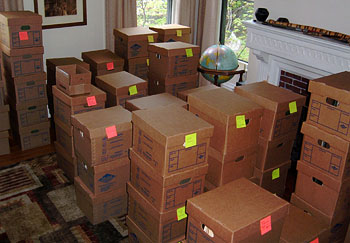 We spoke with Will Bueche about this archiving effort, which has been underway for the past few months.

“The challenge we face,” Bueche explained, “is that most of these writings exist only on paper. The earliest are typewritten, and then much of the rest were written on computer systems which are no longer with us. Only a small amount of papers from more recent years exist as electronic documents.”

“So what I am engaged in is the process of scanning these physical papers through a professional scanning machine which simultaneously scans both the front and back of every page and is smart enough to figure out if there is writing on one or both sides, and then it turns that into a Adobe Acrobat portable document file, a pdf.”

“A pdf is the same sort of document that you get when you download a product brochure, for a new stereo for example. We’re preserving the look and feel of the original paper, we’re not simply reading the text. There is technology available that can attempt to discern the text, but it tends not to work very well – you need to proofread every line if you attempt that, and that would be millions of lines. It is easier to simply scan each paper as an image, as we are doing. This also enables us to capture handwritten notes, corrections scrawled in the margins for example. If you think of the scanner as a camera, essentially what we are doing is we are photographing every paper that John Mack ever wrote.”

“As many as we can; we have a time limitation in that these materials have to be packed up eventually. We have some months to work in, yet it still feels like a race simply because of the sheer volume. John’s papers were in three locations – the old PEER (Program for Extraordinary Experience Research) office, his home office, and his Cambridge Hospital office – and each would be a challenge unto itself.”

“Patricia Carr, John’s longtime associate from the department of psychiatry, kept many of John’s published papers carefully organized, so we’ve begun by scanning what she had already arranged in chronological order.”

“But bear in mind I am referring only to his published papers. Once we’ve finished with his published papers, then we need to start again in the 1950s with his talks and some of his more notable exchanges of correspondence. The entire Harvard inquiry, for instance, produced reams of correspondence. I expect we may find some unpublished essays also. Even among the published works I am sometimes finding alternate drafts, which we are scanning as well.”

What sorts of essays are they?

“There are many papers about psychiatry of course, but his sense of what it was to be a psychiatrist was expansive. From his papers from the seventies and eightes, I am getting a much stronger sense about how politically active he was during the nuclear arms race, how active psychiatrists and doctors were in social causes. I’ve been scanning papers written when doctors were speaking out boldly in defense of the human race. You don’t see that so much anymore. It is an example we can learn from.”

“I’d also never read some of his earlier books, such as Vivienne, the one about a young girl’s suicide. As I look back on that era I’ve begun to really see how careful he was about gathering biographical material, a skill which infused all of his work even up through his research into the lives of alien encounter experiencers.”

“I’m beginning to appreciate why he won the Pulitzer in biography (for his book on T.E Lawrence); being a good biographer isn’t simply a matter of writing in an elegant style or telling a good story. Good biography, and good psychotherapy I expect, is about being meticulous in how you listen to another person, in how you attend to every nuance of what is being said to you. In this John was expert.”

Any chance that these materials may be published, or republished?

“That’s actually a question for the estate of John Mack [Note: later the John E. Mack Archives LLC], which is now responsible for his creative works. What we at JEMI [the John E. Mack Institute] are able to contribute to his legacy is an assurance that these materials will survive; I have every faith that John’s sons and ex-wife will explore options regarding how best to make them available. We are in constant communication, and they actually provided some of the equipment we needed to accomplish this task.”

“Personally I’d love to see a volume of his collected works, pulling together his best essays – both published and unpublished ones – but would any publisher opt for a book with sections ranging from T.E. Lawrence to alien encounters? You can imagine it may take some time to figure these sorts of practical questions, and you must factor in the simple truth that his family is still coming to terms with their loss. It may be some time before they will be able to look to the future.”

“But I am certainly acting with the faith that these writings will be preserved for future generations to look at and learn from, in some way. ”

We will revisit the progress of this initiative again, soon.

The scanning effort is coming to an end this week, and so we caught up with Will Bueche for a final report.

How many papers did you ultimately scan?

“More than 10,000. I passed the 10,000 mark a couple weeks ago, and it is now hovering at about 10,200, with perhaps a few strays left to do. That includes correspondence in addition to essays, of course. These last few days I literally was scanning the last papers while furniture was being carried out around me, and the materials I’d scanned earlier were being carted off.”

And you also scanned in press coverage that Dr Mack had received?.

“I scanned about 900 newspaper and magazine clippings. The newspaper reviews of Prince of Our Disorder (his 1976 biography of T. E. Lawrence) made me sneeze, they were shedding so many paper particles. The last time they’d been taken out of storage was for the reprinted edition of Prince from Harvard University Press – but all they’d wanted them for was for critics’ blurbs. But in those reviews there was also a lot of quality discussion about the differing views of T. E.’s role in shaping the modern Middle East. So there is good cause to save them.”

“Did I already mention – I’ve always felt that the press coverage that Dr. Mack received when he came out with his opinions about alien contact was an invaluable portrait of how our culture felt about aliens at the time he made his case. In fact I’d begun scanning in the press clippings of that era even before the family of John Mack stepped in and made the full-scale archving effort possible.”

How was the scanning of press clippings different from scanning the essays and letters?

“The Mack family made it possible to scan in many essays quickly, using a scanner with a built-in paper feeder. But magazines or newspapers with illustrations required a great deal more care. First, I had to find the original materials, because most of the press clippings had been filed by Dr Mack’s office as photocopies, which tended to be muddy. Whenever I came across the original magazines and newspapers I patiently used a traditional flatbed scanner to create new high-quality scans (see illustration below). So, future researchers looking at this electronic archive will see the press clippings in full color and fully legible quality. I hope that’ll be nice for them!” 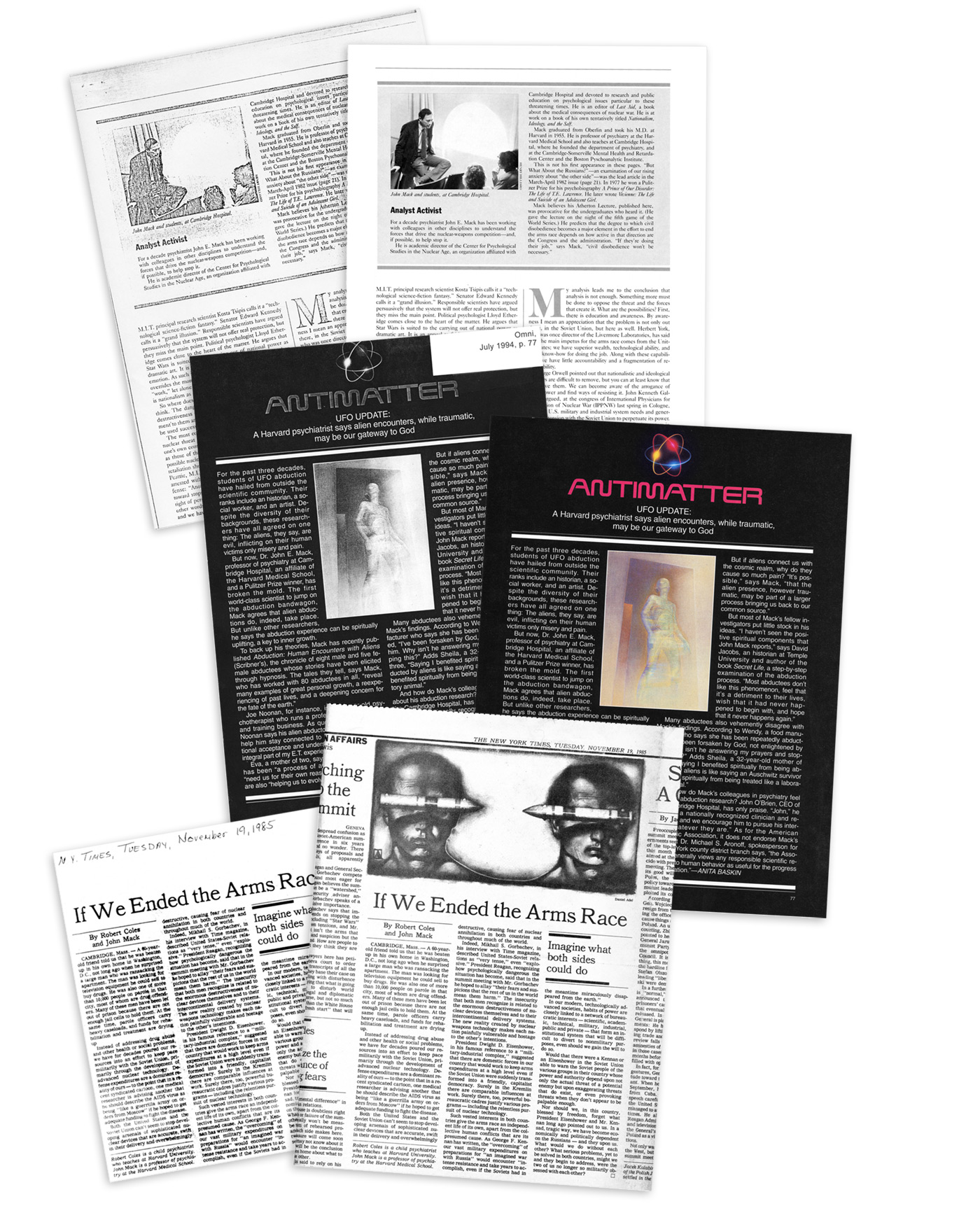 GRAPHIC: PHOTOCOPIES (ON LEFT) WERE REPLACED BY HIGH QUALITY SCANS (ON RIGHT) WHENEVER POSSIBLE

You mentioned future researchers – can you say what will be happening to this archive? Where will it be?

“I can’t say yet. I have some idea, but I can’t say yet because the estate is still in talks. I believe that Dr Mack’s published papers will be relatively easy for researchers to obtain, and possibly his drafts as well, but I am not sure what will be happening to the correspondence.”

“Obviously there is a great deal of scholarly interest in correspondence, particularly Dr Mack’s exchanges with various relatives and associates of T. E. Lawrence. I scanned every bit of it that I could find, including many Air Mail letters written on tissue-thin blue papers that were popular in the UK in the 1960s. Very difficult to scan blue paper by the way. But… there may be legal considerations that would affect whether that sort of material could become part of a library.”

“Letters are obviously a valuable part of history, and if you walk into any book shop you’ll see the collected letters of Freud or Jung or James, etc., but traditionally some history has to flow by before that becomes available to the public. In the future, letters serve as a portrait of an era. But if made available too soon, they lack perspective.”

“In fact we didn’t even scan the 10,000 letters that Dr Mack received from self-described ‘experiencers’ of alien contact. It is simply too current, too sensitive, to scan now.”

“What we did scan in – planning for the future – were the professional exchanges, the correspondence exchanged with colleagues. Opinions back and forth from Mack and his peers about whether alien encounters are real, and who was being most stubborn in defending their opinions. But again, those exchanges will likely have to be kept private for a generation or so.” 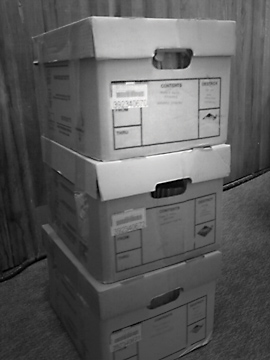 An additional set of documents were recently recovered by attorney Eric MacLeish, who defended Dr. John Mack from an unprecedented, 14-month long inquiry by the Harvard Medical School into Dr. Mack’s research into the alien encounter phenomenon in 1994 and 1995.

Three large boxes, containing in the range of 500 documents concerning this period of time, 350 of which were unique, were delivered by Mr. MacLeish to the Mack family, and were again scanned by Will Bueche.

Of particular interest was correspondence between the attorneys, which demonstrated a level of friction between the sides that could only have been imagined prior to receiving these documents. Also included were letters from Dr. Mack to his attorneys during the inquiry process.

Our thanks to MacLeish, and to the firms which retained these documents in storage rather than destroying them.