A self styled stranger looks homeward

Apparently John E. Mack ’55 was the object of some speculation during medical school. Was he, as Mitchell Rabkin put it, “simply a dreamer, or someone who would reach important heights by his soaring imagination?” In light of his professional accomplishments, John Mack has been anything but idle. He is currently professor of psychiatry at Cambridge Hospital, where he was chief of that service, and is senior staff psychiatrist at the Cambridge Somerville Mental Health and Retardation Center. Dr. Mack won the Pulitzer Prize in 1976 for his study of T. E. Lawrence, A Prince of Our Disorder. 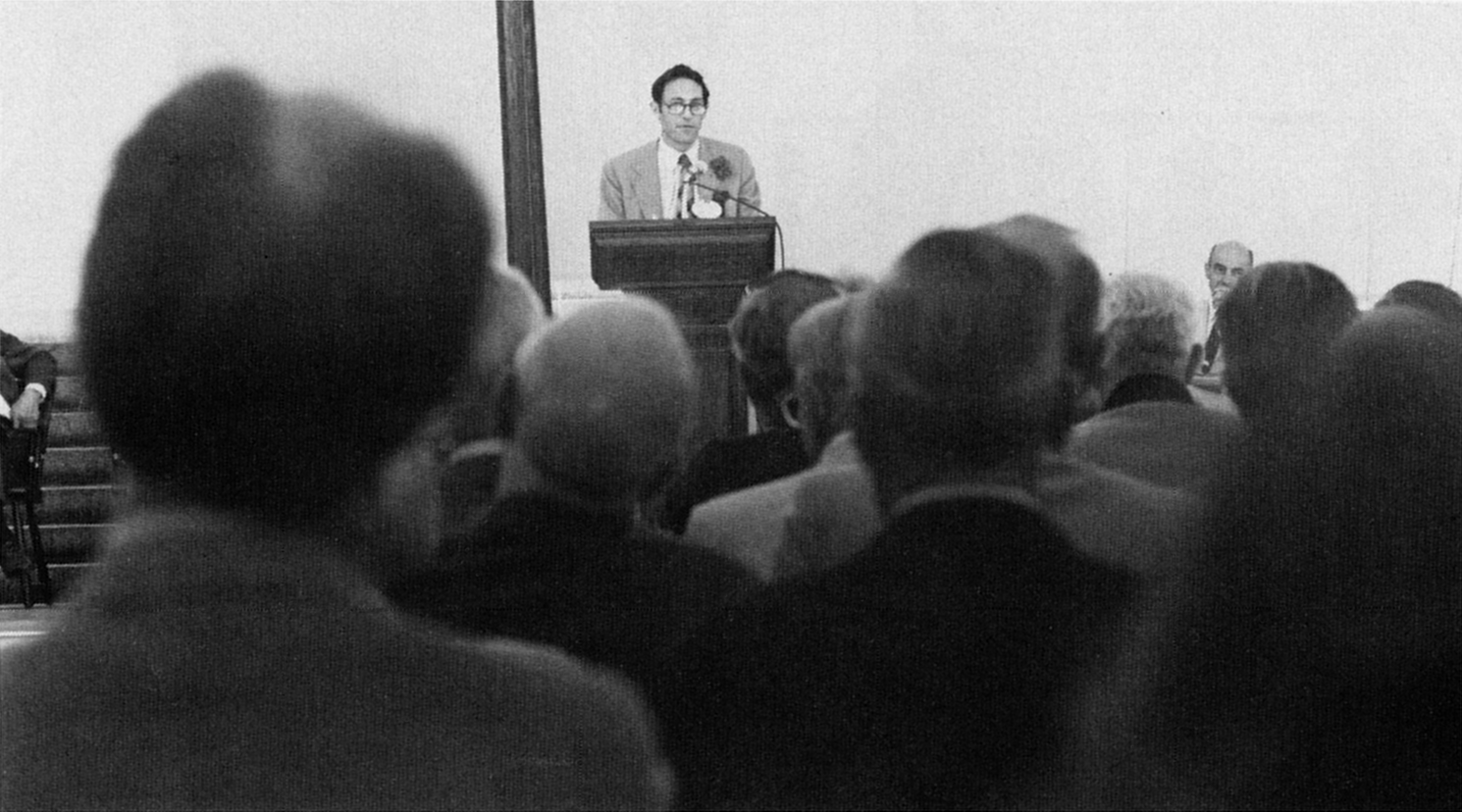 I want to make a confession. I have always felt that I was at Harvard Medical School under false pretenses.

Some of you may remember the interview you had with Reginald Fitz, the assistant dean of the Faculty of Medicine, who was responsible for admissions and student affairs. As part of the preparation for this awesome experience I received advice from several HMS graduates, including a couple of relatives I much respected, who told me not to say anything about wanting to help people, let alone to mention an interest in psychiatry or psychology, but to convey rather a single minded passion for the biological sciences. This I believe I must have done. When applying for internship in the Boston area my fellow students gave me similar advice, although as it turned out our chief of medicine at the MGM, Walter Bauer, whom I came to love and revere, was a superb psychologist.

In the years that followed residency, except for two years in the Air Force in Japan, I have remained within the Harvard Medical School faculty. I have always been pursued by the feeling of not quite belonging, of being, in Georg Simmel’s sense, a stranger.

Simmel was a German sociologist of the late nineteenth century. His stranger was a kind of outsider who does not come today and go tomorrow, but comes today and stays tomorrow. He confronts the group but is not totally part of it. He participates and is a member, but largely insofar as he imports certain qualities which create the common bond. The position of the stranger permits him a certain objectivity to which others may respond with a surprising openness – a phenomenon especially familiar to psychiatrists and psychoanalysts.

Perhaps the choice of borderlands in which to travel — or borderlines with whom to work – has something to do with this notion. Certainly my seeking out of Bedouin tribesmen in the Jordanian desert in order to learn about an Anglo Irish troublemaker who was himself a bit of an odd one, seemed to stretch even Simmel’s concept.

Relatives and old friends asked what running around among all those Arabs had to do with being a doctor, especially a Jewish doctor. I know now, with that sense of order which only a retrospective vie”, can provide, that for me T. E. Lawrence was the ultimate stranger, a wounded soul who moved among an alien race, seeking to repair his personal injury while enabling another people to fulfill their national dreams. Later, while trying to bring some sort of psychological understanding to the Arab Israeli conflict, I came to realize that I had been embarked in Jordan on a private mission, seeking to answer questions about my own identity as a physician and a person.

Even in Cambridge, where for fifteen years I have worked toward the development of a primary care health system and a department of psychiatry in a municipal hospital and community mental health center, I have felt on the fringe. Cambridge, although the Center of the Universe for hundreds of thousands of intellectuals, students, and political leaders, remains a border area for Harvard Medical School.

But now I can reexamine this whole matter of the outsider’s identity from the vantage point of hindsight. The first hint that there was something amiss in my thinking, or at least that I was not alone in my experience, came at a promotions and appointments committee meeting about a year ago. For those who are not familiar with it, this is a Medical School committee that passes upon the qualifications of faculty members at the assistant and associate professor ranks. As a psychiatrist, dealing largely with broader clinical and social problems, I had rather enjoyed reviewing the work of scientists in various specialties, flattering myself that I could in some small way keep up thereby with what was going on in other branches of medicine. It fell to my lot to review for one meeting the proposal for promotion of a young biochemist to associate professor. The person’s work seemed to involve the morphology and properties of a particular enzyme, but after reviewing the supporting letters and taking a crack at a few of the reprints, I had to admit to myself and, ultimately, to the committee, that I could not make head or tail of it. I looked, expactantly, to the chairman of the department which had made the proposal, to explain the significance of the research. To my surprise, however, he looked uneasy and a little flustered and could say little more than that the work was “methodologically very rigorous.” It was then that I began to suspect that in this age of super specialization this chairman and I were in rather the same boat. The candidate was, of course, promoted.

After this I felt inspired to reexamine with an open mind some of my previous assumptions. The twenty fifth reunion report of our class has proven to be a particularly rich source of data. The 107 members who responded reflect 2,675 years of experience and there is much wisdom contained in its pages. There is also a candor, a tendency toward self revelation, which was not present to the same degree in the tenth or twentieth reunion reports, due perhaps to the fact that there is no longer any use pretending that we are something, or are going someplace, we are not. As one respondent noted, the Ptolemaic view of the universe to be had from Harvard is demonstrated in the phrasing of one of the questions we posed to ourselves: “What would you like to tell your classmates of your quarter century of living?” – as if there had been no life before HMS.

I would like to share with you some of what is in this report, and add a few associations to it. The thoughts of classmates have helped me to bring into a fresh perspective what lies at the heart of being a physician, and to appreciate in a new way what HMS, as the place where this was first defined, has meant to me.

A somewhat subjective sociological analysis of the responses yielded a number of interesting facts and impressions. In spite of the personal tragedies revealed, and the generally poor state of the world, for the most part the tone is upbeat. A great many of the members of this unliberated class write enthusiastically of their lives, are excited about what they are doing, and, if they had it to do over, would not change much. There is very little cynicism. The extra ordinary range of professional creativity is not unexpected, but the variety of other activities and interests was startling. Some of us are left of center politically, but all seem fiercely conservative in holding out for the protection of individual freedom in the face of growing government bureaucracies and strangling regulatory systems. The technology which has so profoundly affected the way each of us practices is generally more feared than valued. As a reaction perhaps against the encroachment of institutions upon our lives, there is evidence of a nostalgia for nature if not a return to it. In addition to the many gardeners, backpackers, and hikers, we have two cattle ranchers and several who are spending enough time cutting and splitting firewood to write about it. We are a class of travelers to foreign lands. And the female members of the class seem not to have been affected very much by the women’s movement. They write unabashedly of the pleasure of having babies, of raising a family, and of serving others, including their husbands. One HMS ’55 allowed her husband, also a classmate, to submit her response for her.

Coming closer to my theme, I found that the report was filled with images of seeking, of searching, and with the evidence of successful personal efforts to grow. It seemed that those who had undergone intense disappointments were especially willing to reveal the pains of self discovery and the struggles that accompany change. I discovered that my classmates, like myself, had always wrestled with the question of identity, and were continuing to define for themselves the values and ideals which were central to their lives as physicians. One of us wrote, “I am not big on this roots stuff,” but he, like many others, sought to define what he valued most in his personal and professional life. The word “wrestle” recurred, as if we were a little like Jacob wrestling with the man sent to him by God, his own spirit or demon, in order to find that he was Israel, his true identity and destiny.

A deep gratitude toward Harvard Medical School, an unequivocal feeling of being privileged and lucky to have gone here, is felt by most if not all of us. As several wrote in the report, HMS has provided many opportunities and given us a kind of security. If nothing else, as one put it, “Harvard teaches you not to go through life bumping into furniture.” Many developed at HMS a lifelong excitement about scientific investigation and discovery, although several lament that administrative chores have taken them away from direct participation in laboratory research.

But there is something more basic that must have been learned here, which is never seen as incompatible with Harvard’s commitment to scientific and intellectual excellence. Of the 107 members of our class who responded to the questionnaire all but nine are engaged in some type of practice in a medical specialty, either full time or in combination with teaching, research, and administration. Furthermore, there is expressed over and over in these pages a deep and sometimes growing pleasure in patient care, in the value of giving, and at times bitter resentment toward the political and institutional forces that would separate the doctor from the patient or destroy the patient’s confidence in us. Whether the locus is the private Office, an innovative medical care plan, or the broader community, the common quality is caring for others, the assumption of responsibility, or what one of us called nurturing. After twenty five years another of our distinguished classmates gave as his principal piece of advice, “always get the patient’s name straight.”

I have ultimately come to understand the notion of the stranger in a different way. Each of us, I expect, has had our own desert in which to journey. As physicians I believe we are all strangers, but less to each other or to the Medical School community. We are strangers more among the group we serve. Our profession allows us the prerogative of a special closeness to our patients, their families, and communities, but it is a closeness, a physical or emotional involvement, which is limited, circumscribed by the responsibilities and functions which we are mandated to undertake. In other respects we remain apart, among them yet not among them, near yet far. It is this fact, I believe, that paradoxically makes the practice of medicine so lonely.

But we are not in this sense strangers to one another. Our common experiences and dedication create a bond among us, join us organically to each other. This, for me, is the meaning of reunion.