On January 1, 2019, the documentary filmmakers sent out a special announcement to their subscribers:

The filmmakers report that Ariel Phenomenon is nearly complete. “We remain humbled by and grateful for the bravery of all of the witnesses and others who have come forward, all these years later, to share their memories of that day and all of the days and years after. This film simply wouldn’t exist without their courage and willingness to be vulnerable in speaking their truth. We hope this documentary will do them proud. There’s a special place in all of our hearts for these incredible people!” 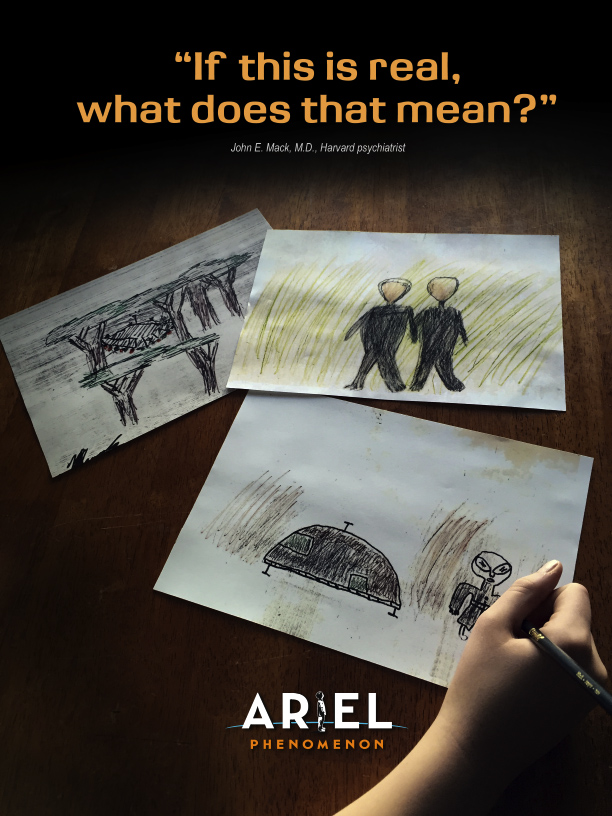 AUGUST 2017 – A new trailer has been released along with a statement from the filmmaker:

The filmmakers have launched a Facebook page. Join this page to be among the first to hear news of the upcoming completion of the Ariel School documentary: facebook.com / arielschooldocumentary.

A note from JEMI: Donations in support of the film may be made directly to String Theory Films on their website.

All decisions regarding any additional interviews with former Ariel School students or other last-minute production additions are being made at the discretion of the filmmakers; the John E. Mack Institute trusts their judgement and encourages your support.

Producer Randall Nickerson says, “This film has been a labor of love for many years. There has never been a lack of effort or time; it’s just been a struggle to get the production funded. Nevertheless, we’re close to completion and it will be done this year. This will be the definitive documentary on this incident and will introduce a new audience to John Mack’s heartfelt approach to the subject. Most importantly, it will give a voice to all those who experienced something profound. This is the final push and we could use any help possible.

In 1994, Harvard Professor of Psychiatry John E. Mack, M.D. traveled to Zimbabwe with research associate Dominique Callimanopulos to study one of the most extraordinary UFO sighting/alien encounter cases in modern history.

On September 16, 1994 at the Ariel primary school in Ruwa, Zimbabwe, 60+ school children claim to have seen a disc-shaped object land behind the school during the morning break time. Two strange beings were reported, one of which approached the children. What they witnessed had a profound impact on their lives; an impact that has continued to this day.

Dr. Mack (who died in 2004) wrote about this event in his 1999 book Passport to the Cosmos, and he shared 3 minutes of the original video recordings of his interviews with the students on the television program Sightings in 1996, and a couple minutes more with Unsolved Mysteries. On YouTube, the popularity of those brief excerpts (traded around in ever-diminishing quality) has been enduring because of the power of the students’ testimony.

In 2007, at the request of the John E. Mack Institute, filmmaker Randall Nickerson began production of an edited video program that (as originally conceived) would present the entirety of John Mack’s interviews with the schoolchildren and faculty, digitally remastered from the original Betacam footage that was shot between November 28 and December 6, 1994.

The film became a consuming passion of Nickerson’s, and he set about broadening the scope far beyond expectations.

• In England, he interviewed BBC reporter Tim Leech who was on the scene within days of the sighting, who first brought the case to the attention of Dr. Mack. Leech’s interview for Ariel Phenomenon was his only interview about his coverage of the Ariel School event, and it was recorded just months before his untimely death.

In December 2015, the filmmakers traveled with a former student (now living in Canada) to the site where it all began. This completes the extra filming that was made possible by donations; editing has resumed.

Click here to listen to Randall Nickerson talk about the 1994 Ariel School sighting and how the then children feel about the encounter today. Interview by Martin Willis on Podcast UFO, October 1, 2014. This is Randall’s first live interview since he began his research.

The filmmakers have launched a Facebook page. Join this page to be among the first to hear news of the upcoming completion of the Ariel School documentary: facebook.com/arielschooldocumentary. And remember there is also an official John E. Mack author page on Facebook at www.facebook.com/JohnEMackMD

“Remembering Zimbabwe’s Mass UFO Sighting – 20 Years On”, an article about the Ariel School sighting, has been published on the website EducatingHumanity.com. The article is recommended, but be aware that the author’s supposition that Nickerson’s documentary is dead is not accurate; neither is it true that 2 hours of Nickerson’s footage appeared on YouTube – rather, someone bootlegged several minutes of footage that Nickerson had shown to an audience at an event and mixed that together with the usual clips from SIGHTINGS and UNEXPLAINED MYSTERIES and Stephan Allix’s EXPERIENCERS that have been floating around for aeons.

One hour of edited program now exists. Refinement of this hour and editing of an additional hour is underway. 2 additional former students have been located and are being interviewed.

5 minutes of footage (archival footage and/or Nickerson’s new footage) has been licensed to James Fox’s documentary “701” (2015).

Various contractual matters have been agreed to between Nickerson’s String Theory Films and the John E. Mack Institute, providing a clear path forward.

Despite the death of the film’s primary funder, former JEMI board member Sandra Wright, work on the Ariel School Sighting film has continued thanks in large part to filmmaker Randall Nickerson, who has endeavored to work on the film between other paid jobs. Naturally this has extended the time-frame for when the film will be completed, but progress has been substantial.

Boston Globe article
Say you’re a documentary filmmaker. Someone comes to you with four hours of riveting archival footage taken in Zimbabwe starring a Pulitzer Prize-winning Harvard psychiatrist, and asks you to turn it into a film. It involves travel. Investigative work. A mystery… (Read Article)

The South African newspaper The Witness reports on the progress of the John E. Mack Institute’s documentary about the Ariel School Sighting. By the way, the article generated over 8500 views for the newspaper, 6000+ from the United States. As comparison, a top news story in The Witness tends to generate between 1500 and 5000 views, so this article received substantially more attention than usual: